I have played my very first Tercios Liber Militum game today, and I’m more than delighted. Fast, dynamic and so fun. Do you want to know more? Continue reading.

To get familiarized with the rules we decided to play a basic game (1000 points) and the first scenario (Glory Fields). I played the Spanish Empire and my rival used German Protestants. A very historical fight! We did some things in the wrong way, but this first game has been very useful to understand the mechanics of the game. I cannot wait to play the second game!

My opponent doubled me in infantry and cavalry. So I decided to concentrate my army: two mounted units protecting the right flank; and one of the veteran Tercios supported by a Shooting company on the left one. The Germans deployed a long line of infantry with potent cuirassiers units protecting their sides. The artillery batteries deployed in the center line. 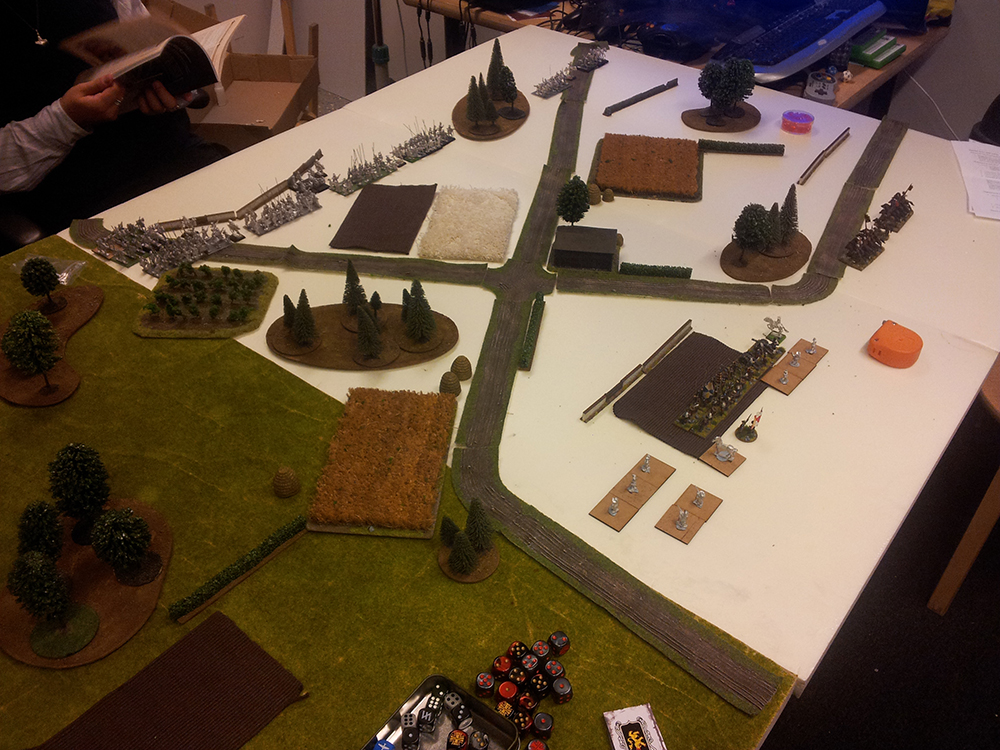 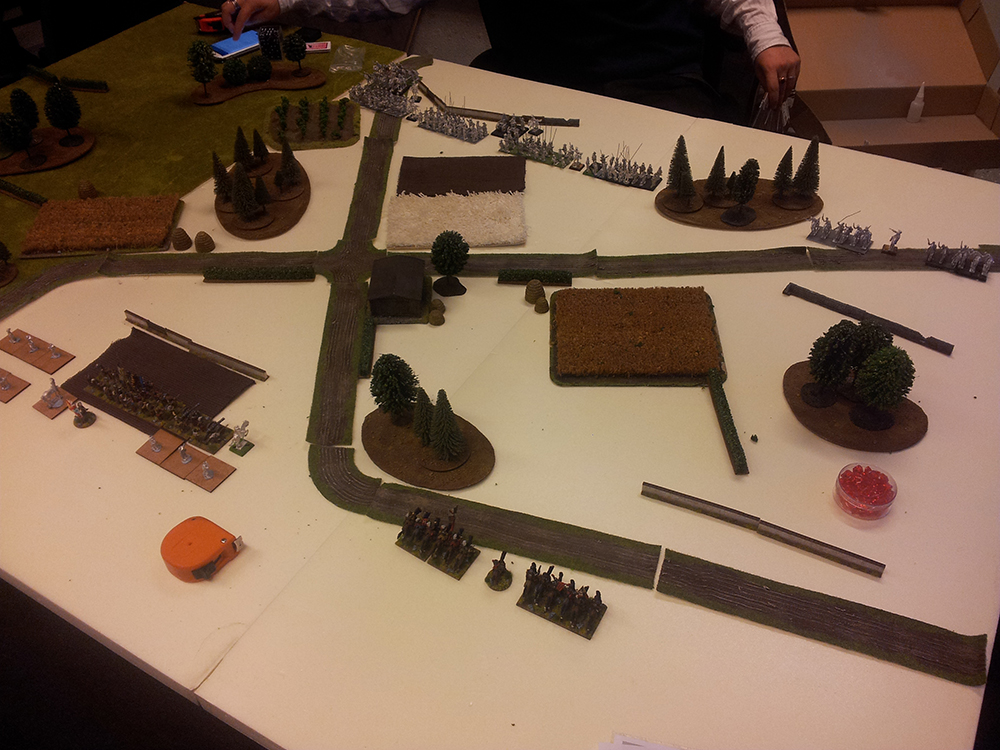 The Spanish troops decide to reorganize the front line. The enemy battery does not have horse limber, and the Spanish troops decide to take advantage of the situation and keep out of its range (this was true for the rest of the battle). The Imperial cuirassier try to win the right flank, although the German counterpart have the same idea. Meanwhile, the whole German line advance at the rhythm of the drums and flutes. 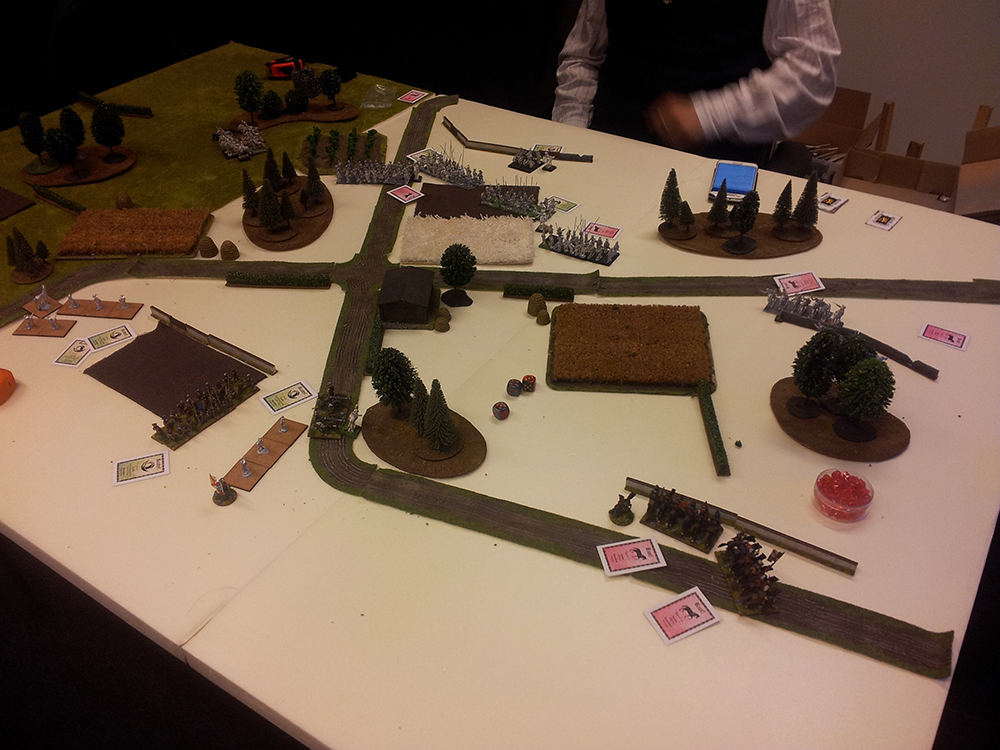 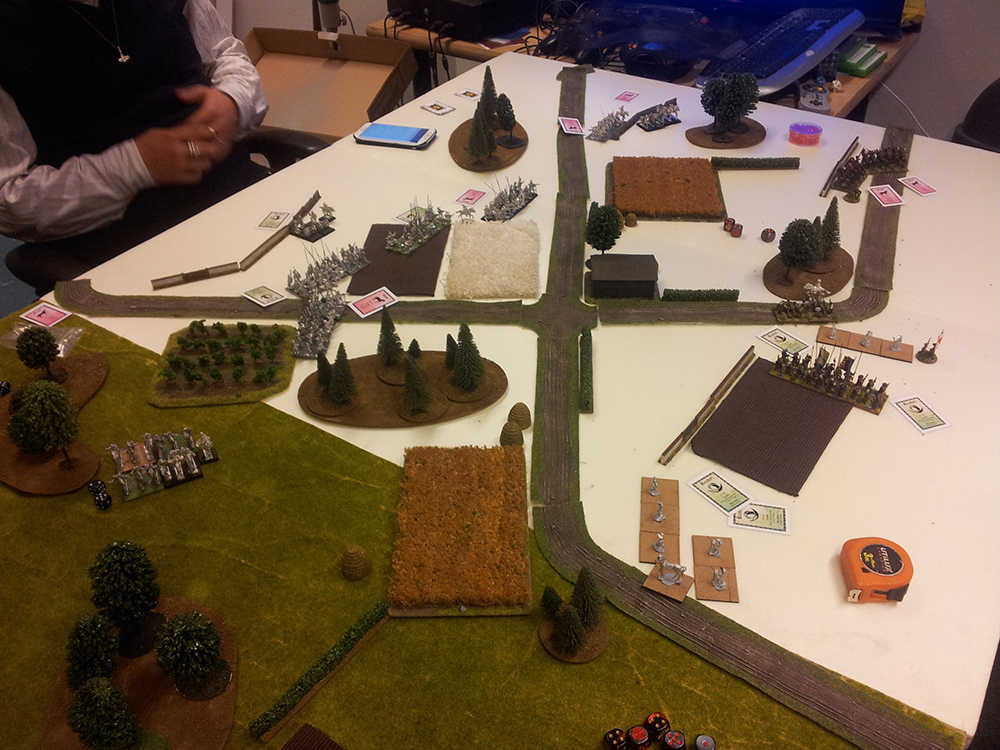 The Imperial troops consolidate the new front, and the artillery battery started seeding pewter. The closer German squadron had some casualties, but it continues its advance, beside the rest of the infantry. The Spanish Tercios waited in silence. On the right flank the Spanish cavalry is going to be flanked by a very intrepid movement of the German Cavalry. The smell to vinegar (disinfectant) used by the German Reiters can be perceived by the Spanish «herreruelos». 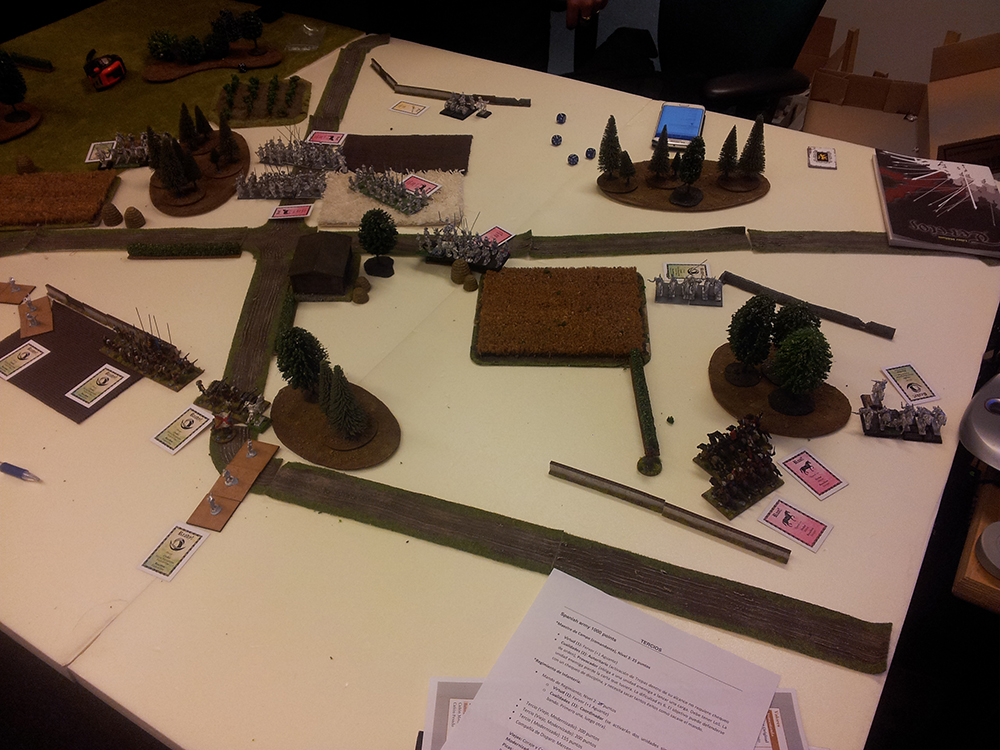 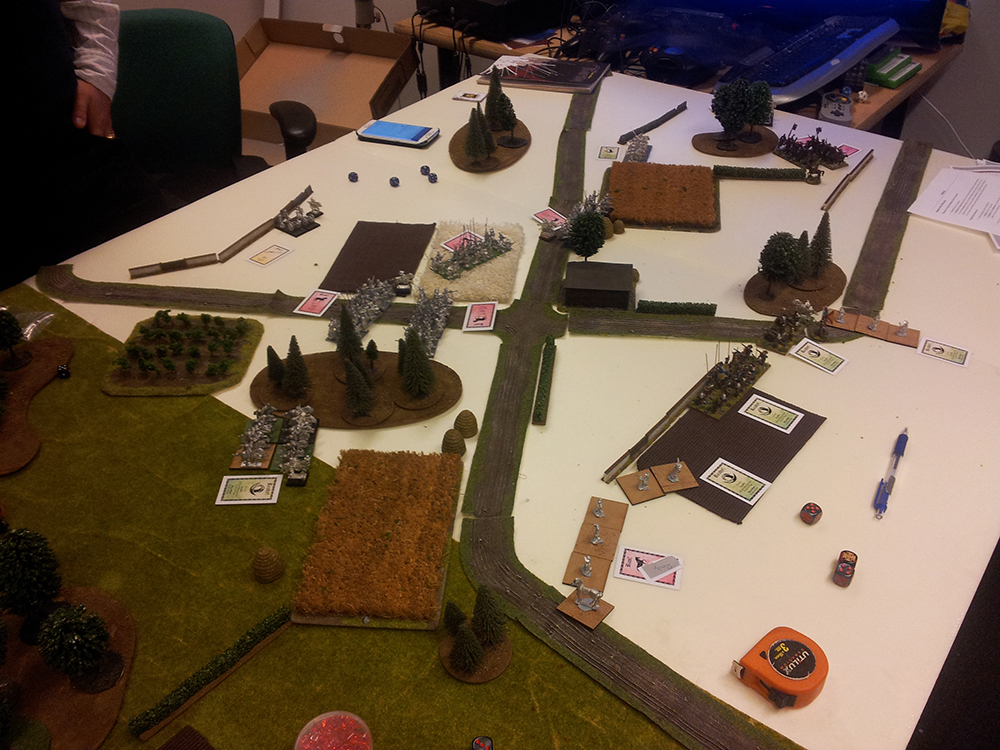 The central German army continue advancing in spite of the very strong punishment they receive. All the Spanish troop open fire against the closest squadron. There is an important skirmish in the right flank, and one of the Imperial mounted units draws back to breath. German are going to win the right flank. The gentleman “Alatriste” has resulted wounded, but the Captain promise him to receive an “adelanto de 5 escudos” in honor of his heroism. On the left flank the strongest German mounted unit is preparing its charge against one of the veteran Tercios. 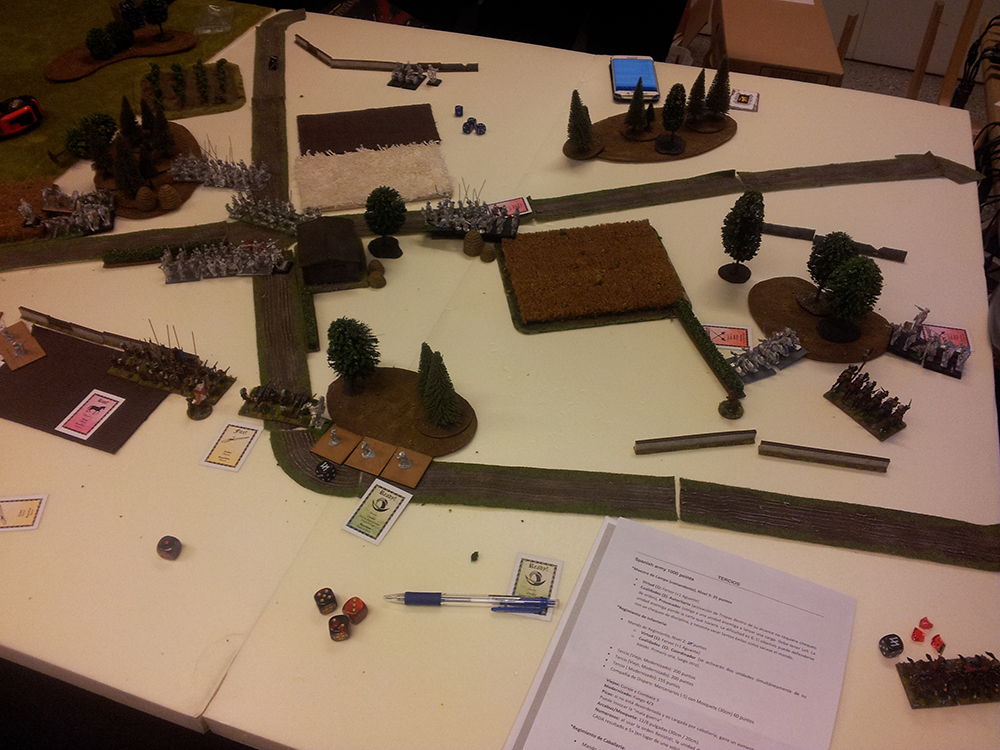 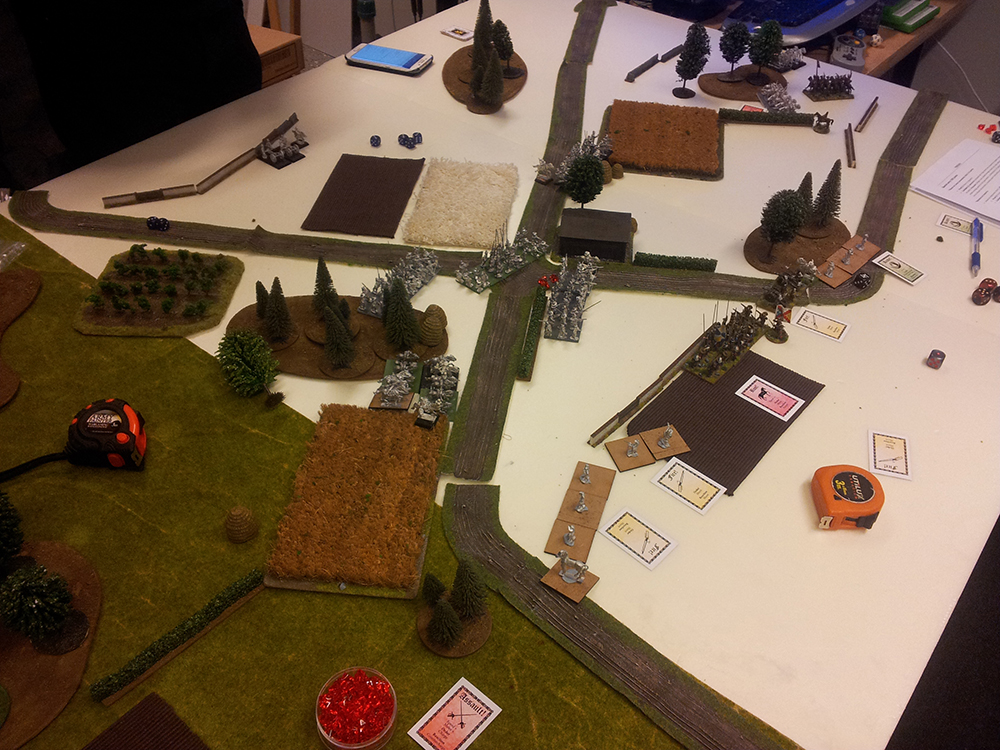 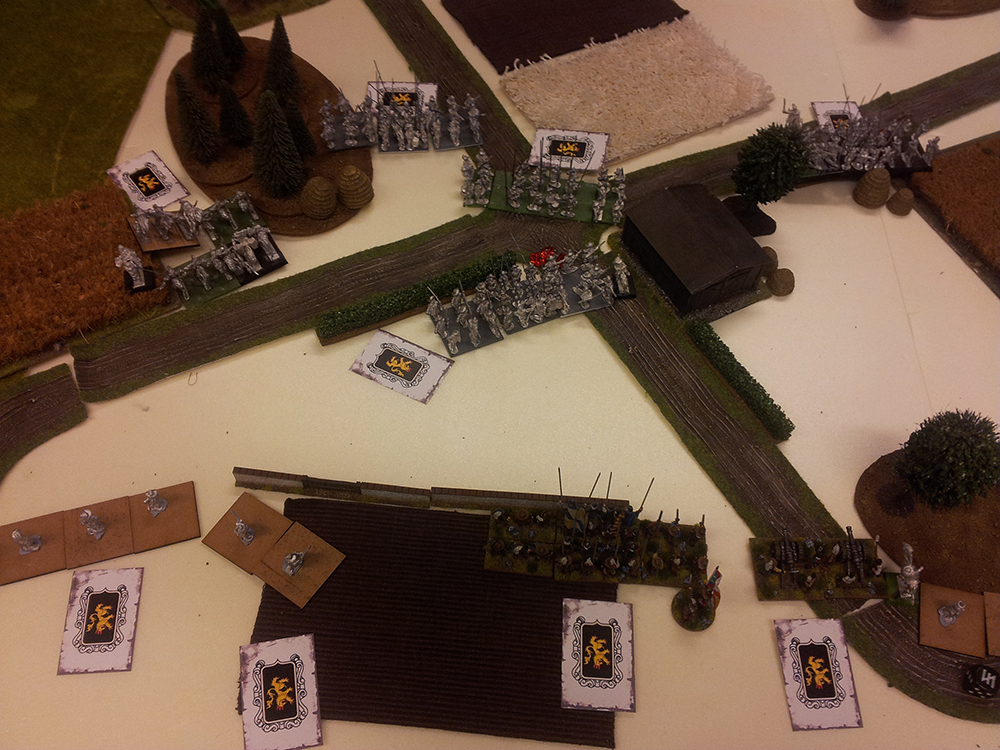 The central German line starts sinking when the cream of its cavalry is torn by the artillery and the muskets from the shooting company. In a cascade of actions, one exalted German squadron decided to charge and find revenge, dispersing the shooting company. The young Tercio arrives late and cannot avoid the slaughter of their brothers, but the German squadron pays with blood its action. 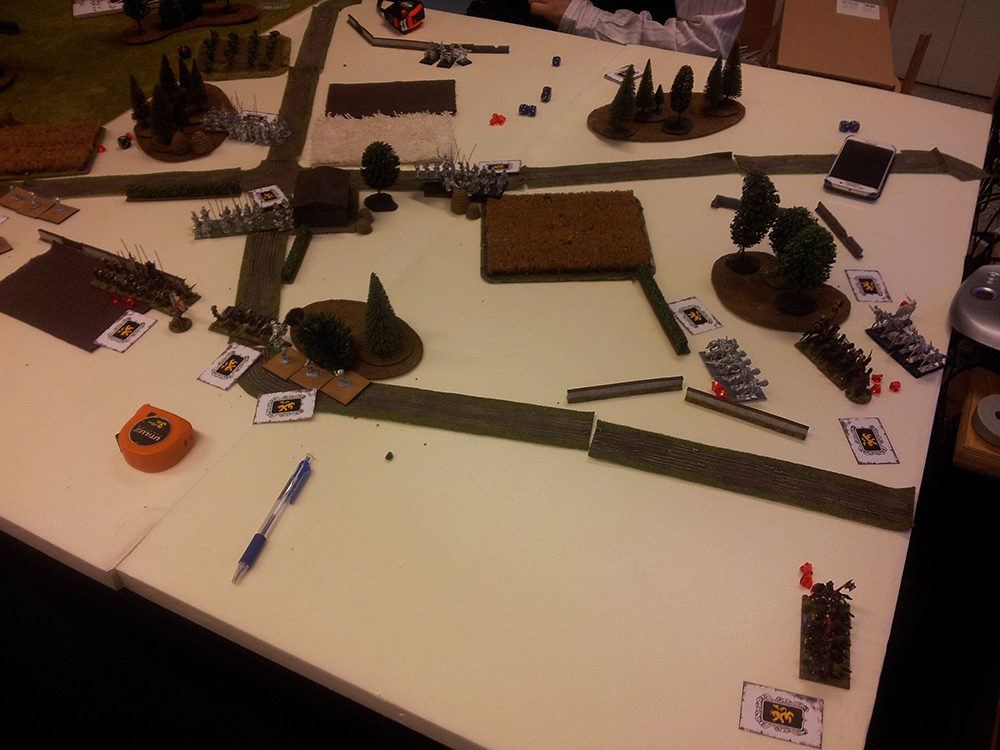 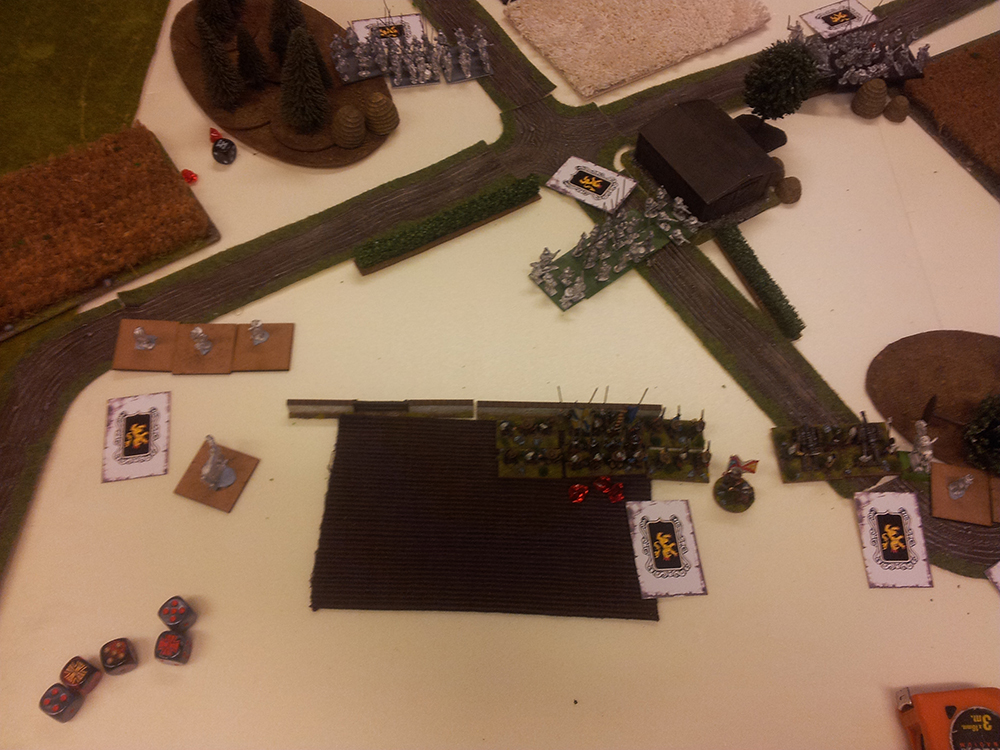 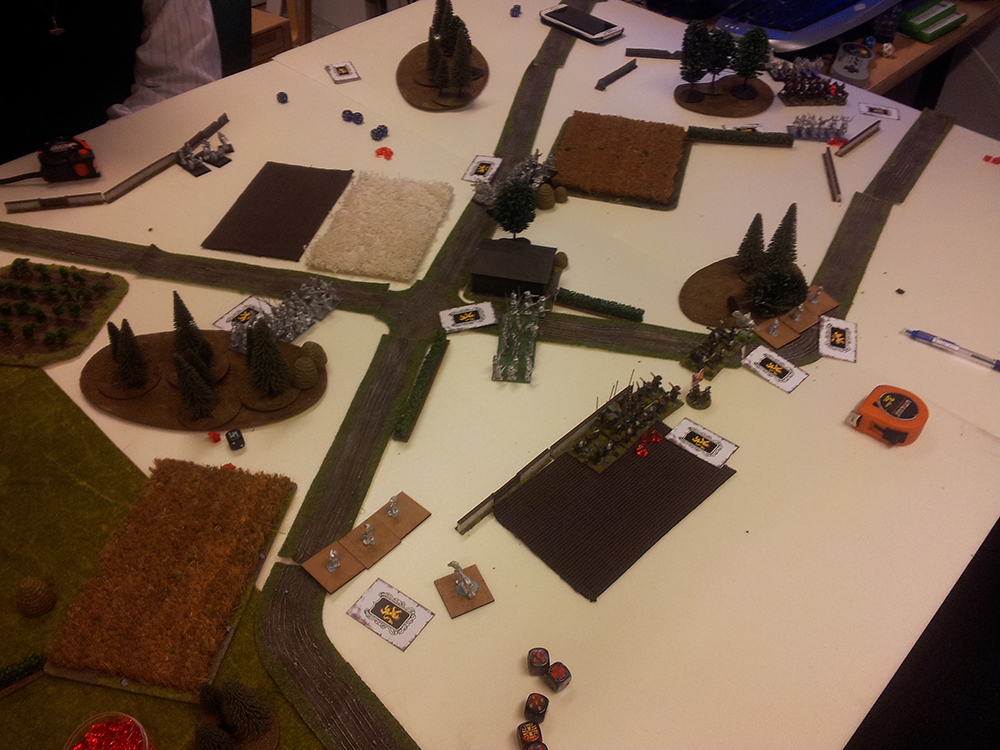 The Imperial forces reorganize once more their front line. Once eliminated the threaten from the left flank, a Tercio Viejo (veteran Tercio) turns 90 degrees and discharge a rain of metal on the closes German Squadron. However, the Squadron hold the fire and while shouting it charges against the artillery. The Spanish artillery command was observing the situation and orders to feed the guns with shrapnel. The slaughter is horrible among the German lines, but the Squadron continues and the survivors nail down iron spikes on the gun ears. Once more one of the Tercios is not able to react on time, probably because the pikemen are in trouble caused by their long pikes inside the forest. However, the musketeers from the unit are able to fire from forest and the remaining German soldiers are dispersed. The skirmish on the right flank continues the impasse, although the second Spanish mounted unit has regrouped and come back to the fight.

We decided to stop here: draw! The following turns would be very interesting. The German troops would be able to win the right flank, although the Spanish army almost control the left and central area of the battlefield, thanks to two veteran Tercios which are totally fresh (the weight of the battle fell on the poor new cams who are still stand up, but badly hurt). However, anything is possible!

I have to say that I really loved this game. I had a lot of fun; and although we were playing for 3 hours (taking into account that we were consulting a lot the rulebook in our very first game), the time passed so quickly. Above all, the game is very fast and the simple mechanics make it very fluid, especially once we got familiarized with the rules. The card system combined with the activation alternation is very interesting, and it requires a lot of consideration in advance in order to design your strategy. I cannot wait to play it again!