Auto adhesives putties, such as Blu-Tack or Silly Puty, are tremendously useful tools to simulate camouflages of hard edges in small scales. They are like plasticine, but they are not oily and are easy to handle. 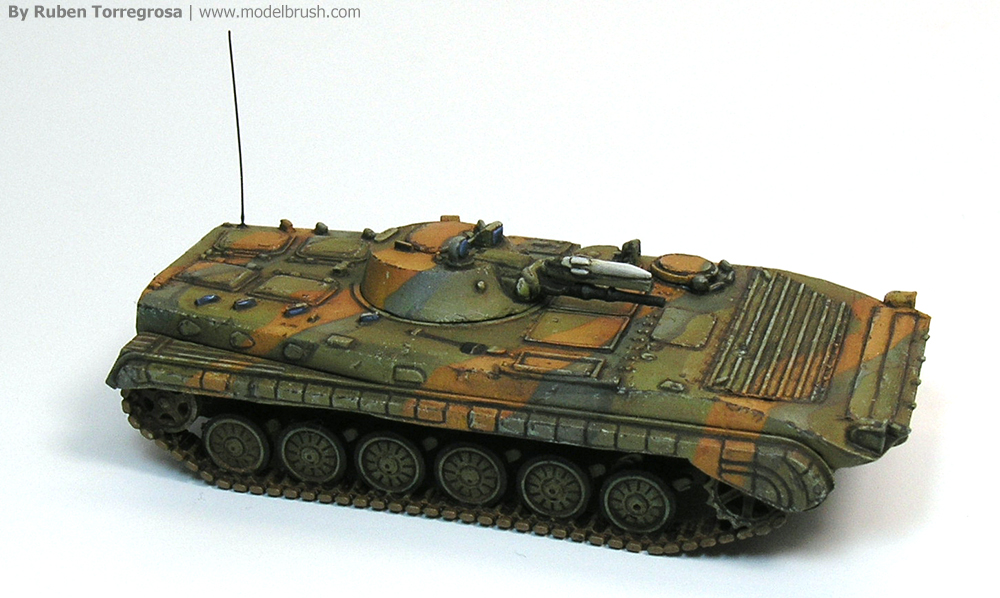 The soviet BMP1 is considered the first Infantry Combat Vehicle (Boyevaya Mashina Pekhoty, BMP) and it appears in the seventies. It has been in service in almost 50 different countries, playing an important role in the new battle systems where the armoured infantry armoured are key pieces. One of these countries was Syria, who used widely this vehicle during the Yom Kipur war. After search some information on the net, finally I adopted the following camouflage: yellow-orange and grey strypes on an olive green surface. This 15mm model is from Khurasan Miniatures.

Once selected the camouflage, I started painting the dominant color, the olive green. I decided to use the olive drab set from Ammo of Mig Jimenez, but only the four intermediate colors. That’s, I didn’t use the maximum shadow and maximum light, since I consider in this scale we don’t need too many different tones. Indeed probably four are too many.

Now I start preparing the second camouflage color, the yellow-orange. But first I have to mask part of the tank with Blu-tack. I take some portions of the putty and I apply them in long segments, laterally across the tank. I use the edge of a brush or toothpick to flatten the edges. Then I airbrush the second color. I’ve use an oxide tone mixed with dunkelgelb base, both from Ammo of Mig.

Then, I repeat exactly the same work with the Blu-Tack, but masking now the orange surface. Because I want to paint the orange and grey strypes one next to the other one, I put the new Blu-Tack segments next to the old ones. And then, I airbrush the grey color. In my case, I’ve use some colors from the dungelgrau set from Ammo of Mig. Remember, it’s very important to follow the same pattern of shadows and lights used in the other colors!.

Finally, the best part: remove the Blu-Tack!. This task is too easy since the Blu-Tack is adhesive and therefore we can use a small amount of Blu-Tack to «stuck» the masks and pull them.

Now is when we have to apply a satin varnish surface to protect the painting work, and we can start applying the weathering effects.